There is an extraordinary level of mystique associated with Captain Fawcett and we are really excited to be working with him.

It’s believed the Captain once supplied Abraham Lincoln with a personal blend of beard oil and the postcode for a Gettysburg address. If that doesn’t get you thinking we’re not sure what will!

We strongly recommend you read on and discover for yourself what he means when he says: “First Class Gentlemen’s Grooming Requisites”.

Naturally we are also excited about the fact that The Captain has selected Unleashed for all his grooming inventory management needs.

What does your business do?

Captain Fawcett is a manufacturer and purveyor of simply First Class Gentlemen’s Grooming Requisites. Around the world hair, beards and moustaches are maintained in tip top condition with his oils and waxes. Captain Fawcett products are currently sold in 44 countries and used by discriminating fellows with a dash of daring from Brazilian buccaneers to Russian rascals. Fawcett’s products celebrated by British barbers, are to be found in the shaving salons of Singapore and have a particularly strong following in Holland and North America, where it’s believed the Captain once supplied Abraham Lincoln with a personal blend of beard oil and the postcode for a Gettysburg address.

Please introduce our readers to your favorite products or product range.

So the story goes, intrepid Edwardian explorer, Captain Peabody Fawcett vanished in 1905 whilst attempting to navigate to the source of the Ubangi, a major tributary to the Congo River. No trace was ever found of his seemingly doomed expedition until in 1997 a battered trunk purchased at a house clearance sale, was taken home and its locks forced. Incredibly, amongst its decaying and mildewed contents there was an exquisite dressing case containing salves, unguents, ointments and the missing adventurer’s long lost journals. Amongst the many tales of derring do, hardship and wonders seen, were found meticulously detailed lists of exotic ingredients for use in the Captain’s very own grooming requisites. These precise formulae have been faithfully followed and Fawcett’s original potions, along with his world renowned Moustache Wax are now available to the discerning gentleman for the first time in over a century.

The Captain’s Gentlemen’s Emporium currently stocks over 40 premium grooming items but his favorite product is without doubt the ‘Expedition Strength’ Moustache Wax. 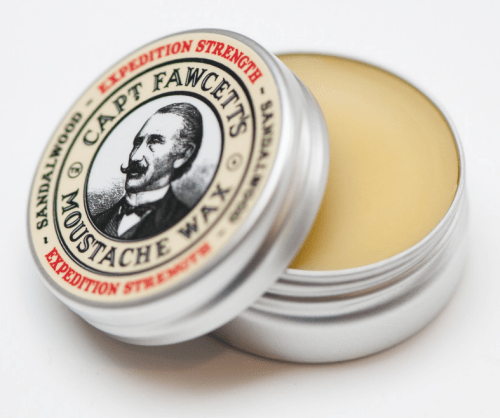 In the true spirit of invention, we believe the Captain first produced his legendary wax in a mess tin over a camping stove and stored it in early film canisters for ease of transportation through the Tropics. That little round tin, safely tucked into a breast pocket is all a gentleman requires to keep a stiff upper lip regardless.

Why do your customers like this product so much?

Captain Fawcett’s customers are all brave to a fault, yet manly enough to shed an honest tear when moved by circumstances such as a bugle sounding the Last Post or legging it out of Darjeeling after losing grandmama’s jewels in a game of poker. However there are times when even the most sensitive of men must carry on regardless and the Captain’s very own moustache wax gives a chap the courage to face tempests and never falter. Designed for modern explorers with a timeless sense of adventure, Captain Fawcett’s ‘Expedition Strength’ Moustache Wax fortifies and flatters the wearer no matter what scrapes he might get into, ensuring there are stiff upper lips from Boston to blessed Bengal. Ah and the Sandalwood scent is rather handsome too

Can you give us a brief history of your business and growth so far?

The discoverer of the Captain’s remarkable journals immediately got to work recreating the long lost recipes, purely for his personal use I might add. However it wasn’t long before the waxes and oils thereby produced were discovered by a troupe of actors keen to brush up their Shakespearean goatees and word spread, as words do. Soon hirsute gentlemen from bikers to bankers were clamoring for access to the Captain’s formulae and it was clearly in the spirit of the man to share the recipes documented in his writing. Thinking 100 jars should do it, they were duly ordered for a tenner and filled with enchanting scents in a rather remote Fenland kitchen. Demand grew faster than a five o’clock shadow, and those 100 jars have become an annual requirement of close to 40,000. All the Captain’s oils are produced in house by his master blender and the legendary wax is still made by the guardian of the journals himself. An extremely talented photographer and designer gave life to the Captain’s brand of Edwardian derring do and skilled social media posts play an important role keeping the Captain’s chums informed about his latest exploits and offerings.

Turnover has crept up by 40% year on year for the past 4 years and with new ventures and collaborations planned the Captain’s legacy lives on in everyone who knows the true value of keeping a stiff upper lip regardless.

How is Unleashed helping your grooming business grow?

Ah, now for the formalities. Captain Fawcett is delighted to report that Unleashed has enabled his stock control to be brought online and synched with the frightfully clever accounting software Xero that was already in use. This has generally seen a massive increase in efficiency giving the Captain more time to plan adventures and visit his barber.

Unleashed’s features are simply perfect for the Captain’s business interests. As both a citizen of the world and an international trading company to boot, the ability to allow individual customer profiles with differing discount structures and European VAT numbers is extremely useful and keeps the Captain’s affairs shipshape and above board no matter what his mother might think!

What excites you about your business right now?

Captain Fawcett is very much looking forward to some splendid new collaborations with well-known whisker-wearers in his Signature series. The series’ first partner was model Ricki Hall whose Booze and Baccy Beard Oil, a bespoke blend for the dandy and man about town has proven most popular. New in 2016 is the Million Dollar Beard Oil, a scent of fresh ocean air with earthy resinous notes and enchanting citrus, which uniquely includes luxurious flakes of 23 carat gold. It was crafted with Jimmy Niggles Esq, founder of the charity ‘Beard Season’ to raise awareness for the fight against melanoma. More collaborations are in the pipeline. And never one to heed superstitions about ladies being unlucky on board ship (indeed, in every port he invites several onto his quarterdeck) the Captain is currently developing a product especially for women after discovering his dear mother was of that persuasion.

What are you particularly proud of?

Growing a business is like growing a beard, one needs patience, determination and trusted relationships (especially with barbers due to the way they flourish a blade as they lean over a fellow). The Captain is proud that from humble and somewhat solitary beginnings, he has gathered a team of staunch companions whose enthusiasm for his eccentric ideas is unfaltering. As a life long traveller and fortune hunter, Captain Fawcett is delighted his products are being celebrated by gentlemen of taste all over the world. He is also proud to be able to support causes close to his generous, though somewhat wayward heart.

Are there any not-for-profit causes you or your business is passionate about and why?

The Captain is above all a man of action, albeit a beautifully scented one. He loves a bit of pluck and to him there is nothing more thrilling than sponsoring feats of courage and derring do, especially when they necessitate keeping a stiff upper lip regardless in support of a charitable cause. Recent adventurers flying the Captain’s flag have been four daring girls rowing across the Atlantic, a couple paddling a canoe up the Mississippi, a Tuk-Tuk racing 2000 miles through India and a 1963 Saab racing from Oslo to Monaco in the Monte Carlo Rally.

Closer to home Captain Fawcett is a proud sponsor of the Extreme Cellist who is playing on each of the UK’s 57 remaining piers to raise funds for Alzheimer’s Research and for CHICKS children’s charity and he’s supporting his chum, the model Ricki Hall who is shaving his famous beard to raise money for Mesothelioma UK in honor of his dad. You’ll be relieved that engine oil isn’t an ingredient of the Captain’s products, but he does find the smell of adventure a real tonic, so is proud that riders in the both the Paris-Dakar rally and the Isle of Man TT will be bearing the Captain’s colors. Latest to join the Captain’s roll call of heroes is a trio of adventurists in a rather splendid blue Morris Minor. Armed with nothing but a spanner and box of Yorkshire tea, these lionhearted lads will be driving from Edinburgh to Mongolia to raise money for Cool Earth, which works with indigenous people to halt the destruction of rainforests.

Surely it’s time for stiff gin? All hail the hirsute!