Five Facts About Shipping Yards That Will Blow Your Mind

Today, we welcome our guest poster, Cory Levins, who serves as the Director of Business Development for Air Sea Containers. Cory oversees the development and implementation of ASC’s internal and external marketing program, driving revenue and profits from the Miami FL headquarters.

Before joining Air Sea Containers, Cory Levins was the Director of Business Development for Marketing and Real Estate Lending Companies. Cory enjoys spending time with his family, traveling, sports, and the ocean. 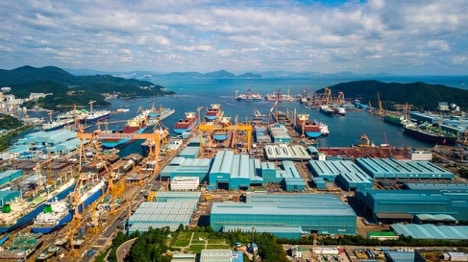 Shipyards or dockyards are places where ships are built or repaired. These usually exist at major seaside ports or alongside tidal rivers with easy access to the sea. They include mechanisms to manufacture vessels, place them in or lift them out of the water, or to drain water around them for access.

Typically, ships are built in dry docks, an area of the docks where water can be pumped in or out. When the shipbuilding is finished, water is allowed to enter the dry dock and the ship to float out. In some yards, ships are built on an inclined ramp and then allowed to slide into the water when complete. This inclined ramp approach is not so common today, because there is some risk to the ship upon entering the water. Here are five little known facts about shipyards that will blow your mind.

1. The biggest shipyards are in Asia

The ten most significant shipbuilding companies in the world are all from Asia, with four in the top five from South Korea, and the rest in China and Japan. The most significant yard, run by Hyundai Heavy Industries, is at Ulsan in South Korea. The yard runs for over 2.5 miles, employs over 60,000 people, and produces ships of significant size every 4 to 5 days.

By contrast, the entire U.S. shipbuilding and ship repair industry across 50 states support 110,000 jobs, and in 2014, delivered just over 1,000 vessels. Asia shipbuilders, in particular those in South Korea, are a significant size.

2. The biggest shipyards are too small for some ships

The largest ship ever built was the Seawise Giant, by Sumitomo Heavy Industries at its shipyards in Yokosuka, Kanagawa, Japan. Completed in 1979, it took five years to finish, serving initially as a crude oil carrier and finally to carry containers. It had a draft of 81 feet, which unbelievably was too big to navigate the English Channel or the Panama and Suez Canals.

Fully loaded, it displaced over 650,000 tons in its 1,500-foot length. It sank during the Iran/Iraq war, but being so big, it was salvaged and ultimately sold for scrap metal in 2009.

The Seawise Giant might be the largest ship to ever be built in a shipyard. The Freedom Ship, in its planning stages, is too large to be made in any existing shipyard and so will be built out at sea. This colossal giant is 4,320 feet in length with 25 stories that will house over 50,000 people. It is more than three times the size of the Seawise Giant and will circumnavigate the globe once every two years. If everything goes according to plan, construction on the ship should start in the next few years.

3. A shipyard holds the world’s most massive crane

The world’s largest crane lives at Yantai Raffles shipyard in Shandong Province, China. The crane is called Taisun and holds a Guinness world record for the heaviest lift at just over 20,000 metric tons. It’s a massive double gantry crane, with a height of 133 meters, and a span of 120 meters. It employs 50,000 meters of wire rope to do its job, the building of offshore oil rigs and semi-submersibles. Completed in 2009, it was unveiled at a ceremony hosting more than 600 people.

Taisun provides enormous safety benefits to shipyard workers by allowing large prefabricated pieces of rigs to be coupled together safely. Previously prefabricated sections were limited to 1,000 to 2,000 tons in weight and needed installation from the ground up, making the work complicated and dangerous. With a lifting capacity of 20,000 tons, prefabricated sections can be built larger and installed from greater height, making the process easier and safer.

Perhaps unsurprisingly, shipyard workers are subject to daily risks to their life and health. Their job requires them to work outside, exposed to the elements, and they must be physically healthy and aware.

At times, workers are high up on bulkheads facing sheer drops, and at other times, they are cramped into small spaces. Cranes, heavy moving objects and dangerous equipment, like welding torches and riveters, surround workers at all times, keeping them in constant danger. Falls are hazardous, as they happen from a height with broken backs and bones; even drowning is a risk.

Amazingly, exposure to asbestos is still a concern in the industry. Although banned for most uses, it is still legal and required for specific applications where high temperatures are involved. Plus, on older ships, asbestos is widely used and so becomes a risk to the shipbuilder. Exposure to asbestos causes mesothelioma, which can take years to surface, putting shipyard workers at risk into their old age. 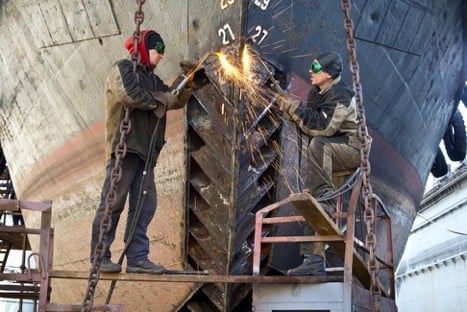 5. The U.S. Government is a significant shipbuilder

The military employs two large U.S. corporations to build most of its ships, including aircraft carriers. These are General Dynamics, and Huntingdon Ingalls Industries has five private shipyards dotted across the USA. In addition to these five yards, there are four government-owned-and-operated shipyards used primarily for repair, maintenance, and modernisation, with one of these in Pearl Harbour.

According to the Congressional Budget Office, the average cost per year allocated to U.S. Naval shipbuilding is $21 billion for each year between 2017 and 2046. This amount is the cost of maintenance plus the extension of its battle force ships (the entire navy) from 272 to 308, a goal it looks to achieve by 2021. The entire U.S. shipbuilding industry contributes approximately $38 billion to the national GDP, highlighting the importance of the government’s contribution. In fact, during 2014, 10 of the 12 most expensive deep draft vessels completed in the industry were delivered to the U.S. Government. 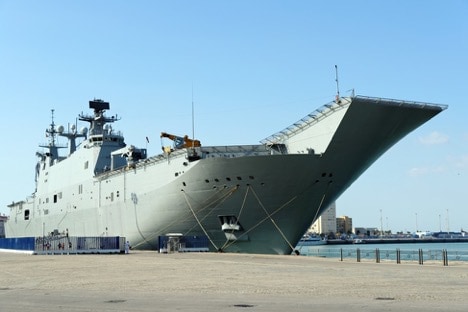 The shipbuilding industry is thousands of years old, initially fulfilling our need for exploration and discovery and then enabling trade, first between local communities and then globally. It’s a significant industry, often subject to boom and bust as the demand for global trade fluctuates.

It’s also one of the most dangerous industries for workers, who suffer exposure to the elements and the dangers inherent in the use of heavy machinery, specialised equipment, and heavy materials, often at a great height or in confined spaces.

However, the shipyards of the world are necessary and essential, today supporting more than 50,000 vessels in the merchant navy. Many of these bulk and container carriers move shipping materials and resources efficiently around the globe.