Over the past ten years, the issue of stagnating productivity in the United Kingdom has grown to seem almost unstoppable. Each report on the issue from the country’s Office of National Statistics (ONS) offers few signs of hope — to the point that no individual solution seems sufficient to tackle such an overwhelming problem.

To give a sense of the scale of the issue, UK productivity lags the rest of the G7 nations by an average of 16% – which embarrassingly equates to over 6 hours every working week. To put that another way: by the time a business in Canada, France, Germany, Italy, Japan or the United States gets to 10am on Friday they have produced, on average, what the UK needs a full week to do.

The issue is also particularly bad for manufacturers. According to the ONS, in the year to December 2019, UK manufacturers became 1.6% less productive, dragging the whole-country productivity figures backwards by 0.2%. 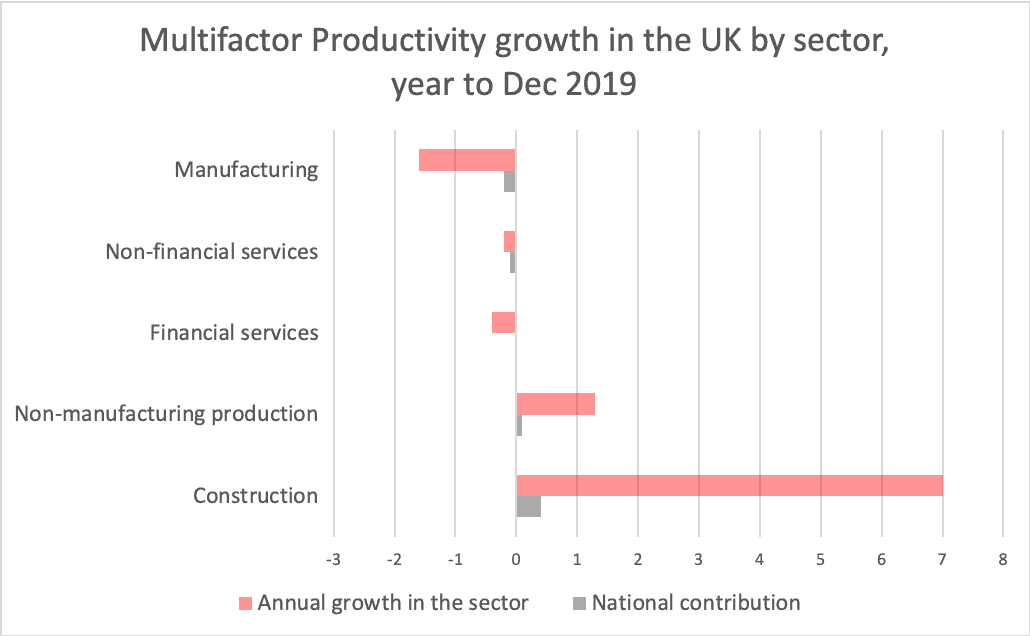 So what’s going wrong? And more to the point, how can an individual manufacturing firm – in the UK or elsewhere – lift their own productivity performance?

The answer can be found by looking at how the UK calculates multifactor productivity (MFP). From there, a four-part strategy for boosting manufacturing productivity becomes clear.

How does multifactor productivity work?

MFP analyses how efficiently an economy, area or business is converting its inputs (labour, capital and resources) into outputs (sales). There are four factors that make up how these inputs are calculated that manufacturers should pay attention to:

By looking closely at each of these, the task of lifting productivity becomes manageable.

Manufacturers tend to be deeply invested in equipment, property and technology. Boosting MFP requires eking as much as possible from this investment. For example, by keeping stock levels lean to keep property costs down.

Eliminating IT costs is an even better route. Many manufacturers are spending far too much on keeping legacy systems up and running, or upgrading them to the latest version. Unlike investment into equipment and hardware, these costs are easy to reduce or remove: research by Microsoft and Invensys found that cloud-based manufacturing tools can save 54% from IT budgets.

Much coverage of the productivity gap has focused on UK manufacturing’s skills shortage. But while this is undoubtedly a grave issue, hiring new, highly skilled staff won’t deliver MFP growth. Why? Because they demand higher wages — and quality-adjusted labour input takes staff costs into account.

The answer, then, lies in doing more with existing workers.

According to research by Gallup, an engaged workforce is up to 17% more productive than an unengaged one — so look for ways to empower workers by automating the tasks they hate.

For many manufacturers, automation is synonymous with new equipment. But investing further into hardware will simply increase capital inputs and lower MFP. Software is a good alternative that’s more cost-effective and agile. Volcano Coffee Works, a London-based coffee roaster, provides a good example: it saved staff hours each week by automating manual entry with a software solution, making their staff instantly more productive (and happier in their work to boot), without increasing labour costs.

3. Look to your intermediate inputs for productivity gains

Plenty of overheads fall under the ‘intermediate inputs’ umbrella. But to transform MFP, manufacturers only need to focus on two: purchasing and production costs.

Supply chains and production processes are more complicated today than ever. Without complete traceability, a business can easily waste cash on uncompetitive pricing, freight costs or lost stock. These issues eat into margins and take up staff time — doubling up on productivity pain.

However, there are quick solutions to these complex issues. For example, incorporating comprehensive supplier management tools or tracking margins with accurate landed costs.

Simply put, a ‘bought for X and sold for X’ approach to margins is no longer going to cut it. Manufacturers need 100% margin accuracy and transparency across the entire supply chain. Achieving this with Excel or other basic systems is tricky, but not impossible. However, an inventory management upgrade will help things immensely.

4. Look to your Gross Value Added

But reducing costs is only one half of the margin equation — and inputs only make up half of the multifactor methodology. Manufacturers can now take advantage of numerous customer-centric sales opportunities across both the B2B and B2C spheres. Focusing on mastering pricing, empowering customers and selling at scale is the final step in our four-factor method.

Incorporating sophisticated pricing strategies is the natural next evolution once a business can see accurate margins. Selling each product at its absolute optimum price point — and giving customers prices based on their behaviour — is crucial to growing MFP.

A B2B Store, meanwhile, empowers wholesale customers to engage on their terms. It puts an end to the days of forcing customers to call or email with orders: reducing errors, saving time and making life easier for everyone involved.

Selling at scale is now a real possibility for companies of any size. Taking a multichannel approach to sales can help sidestep barriers such as timezone, language or culture; it can push time-intensive tasks back on to customers, and unlock opportunities in entirely new markets.

In short, a smart multichannel strategy provides the means to increase sales without increasing inputs, which is the fundamental basis behind any attempt to deliver MFP growth.

Putting the four-factor method into practice

Solving stagnating productivity may seem out of the reach of a single independent manufacturer. But by doing more with labour, capital and intermediate inputs — plus adding value to outputs — companies can cut a potentially overwhelming issue down to size.

To see how that works in practice read more about how one UK manufacturer – LED light maker Lazer Lamps – used cloud technology to maximise productivity and support growth.