Gerhard opened by stating that while Rod’s talk was about what’s happening and good from Xero’s perspective, he’d be taking a different approach and share how the environment looks from a big-four perspective.   Inviting us to cast our minds back to 2008, Gerhard displayed a picture of a calm, flat sea. That was the climate that the accounting industry was operating in at the time: An industry largely dominated by middle-aged men, seemingly content to continue working in the same way.

Today’s climate couldn’t be much more different. There are fundamental changes happening in the accounting industry and there are two options: exploit the changes or be affected by them. There’s an immense opportunity to be seized by some, while others who are slow to adapt will face a tough time in the professional services environment.   Gerhard spoke of a new development in the emergence of the “clipetitor.” Clients aren’t strictly just clients anymore, they’re gaining access to new technologies and can compete with the companies they’ve traditionally had to use for certain services. This shift in power is bringing new players into the market and breaking up the one-stop-shop big firm providers. New players are more nimble and are able to provide specialised services without the large overheads. Gerhard shared some examples of new companies in this space: 10EQS, Duedil and Narrative Science.

The traditional mechanistic extrapolations are no longer valid (do xx with yy people). “The whole game is changing.” He urged us to move away from thinking that technology is video conferencing, and with these revelations hanging, joked about it being a valuable time to be on the verge of retirement in the financial services industry.

He reiterated that the changes are very much underway now. Digital disruption is already affecting your supply chain and client base. “Objects in the mirror are closer than they appear,” he added as he addressed a slide listing the coming and current changes.   The professional services industry is particularly susceptible to digital disruption, “You can export from anywhere in the world to anywhere.”  .

Business models will be fundamentally redesigned over the next decade as vast chunks of tasks that we used to handle will be outsourced, through us or around us.   Gerhard’s final thoughts were on the need for organisations to get much better at sensing what’s happening: Having a hunch, making the hunch into a prototype and asking how to help shape the future.   He also added that there’s a need to lead people in an organisation and make them feel that they belong. And that we need to celebrate and embrace competitiveness and let it drive us to improve. 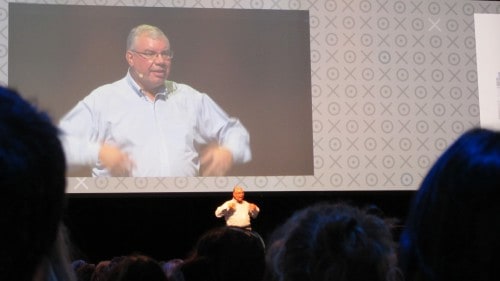