We were thrilled to be part of XeroCon last week at the Viaduct Events Centre in Auckland. Loads of passionate accountants and bookkeepers attended to get the latest news on Xero’s developments and learn about extending the services they can offer clients with integrations through the Xero ecosystem. Unleashed Software has a strong Xero integration, and we were delighted to be Xero Add-On Partner of the year for 2012.

Our booth in the expo area was popular with attendees and hosted a lot of fantastic conversations about the logistics of having ‘stuff’, business processes and how getting a cloud-based inventory system is a major advantage for business owners. Thanks to everyone who stopped by. 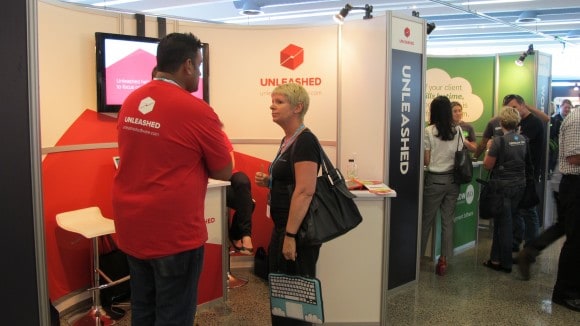 Along with the tech expo, there were loads of interesting speakers. In fact, if there was a gripe to find with such a well-run event, it’d be that it wasn’t possible to make it to all of the sessions. Interesting topics spoken about succinctly with insight, the standard was very high.   Day one was kicked off with juice, coffee and Petra Bagust opening proceedings on the main stage by enthusiastically advising us to get out of our comfort zone. She implored us to view the conference as an opportunity and to make the most out of being there. Introducing Rod Drury, Xero CEO, she referenced his vision for New Zealand as “much more than just an exporter of wine and milk.” 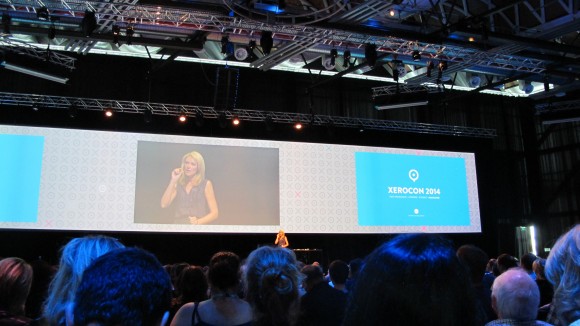 Rod’s keynote focused a lot on the theme of NZ’s tech export potential stressing that there’s an opportunity to be seized in the services industry. Speaking about Xero’s impressive growth, he reiterated that there’s still a lot to come — they are anything but complacent. Having just passed 250,000 customers worldwide, the next immediate focus is for them to double that number. Though there was a celebratory atmosphere as Rod recounted the many impressive achievements of 2013, he added that he was “not totally comfortable with what we shipped last year.”

A number of projects are still being worked on, including improved reporting. According to Rod, the new, improved features will be bigger and better, but it’s taking longer than anticipated to deliver. Without getting bogged down in specifics he did say that it was “very close” with the effort and resources being channeled into it.

Rod’s passion for New Zealand as a petri dish for growing tech companies was made evident. He spoke at length about how you can do things here that you can’t anywhere else — the smallness can be an advantage and he sees New Zealand as a test lab for the rest of the world. With 90,000 paying NZ customers now using Xero, their impressive market share presents an opportunity as those businesses can be linked electronically. NZ now offers the chance for Xero to define connected services, and Rod added that we could be five years ahead of where Australia and the US are.

One of the key announcements was that of XeroTV, short videos that provide businesses with valuable content. Rod described this platform as a way to get their messages out on a large scale. Xero’s online training has a new UI and Xero U will change the way Xero and add-on training resources are delivered.

Rod reported that 40% of invoices going through Xero are being sent online. This means people know straightaway that the invoice has been seen, and he described this as a “fundamental change in the communication between customers and suppliers”. Educating Xero customers about the power of online invoicing is a passion of Rod’s as it’s reducing the average payment time from six weeks to less than a month. He added that there’s more that they can do to bring that time down. “With reduced payment times, the velocity of small business grows,” he added.

With a glimpse into the future, Rod talked about ASB’s relationship with Xero and added that with ASB coming on board with bank feeds that other banks would be following. Within the next year, Xero customers should be able to send payment instructions directly to online banking. This will increase the speed that small businesses get paid, and hopefully set a new standard.

Other big projects include assigning an electronic ID for every business, and Xero’s push into the farming industry in New Zealand. Wrapping up his talk, Rod emphasised his vision for NZ’s economy, asking the audience to imagine what it’d be like if everyone had a goal of getting 20-30% of their revenue from overseas. He added “there’s nothing more exciting than sending an invoice overseas and getting that money coming through.” He thinks there’s a great opportunity “living in our awesome country and exporting”. But he also welcomed attendees to come and work at one of the 17 global Xero offices when travelling, “they have great coffee.”

The tone was set for the next two days: high paced, high energy and big vision. 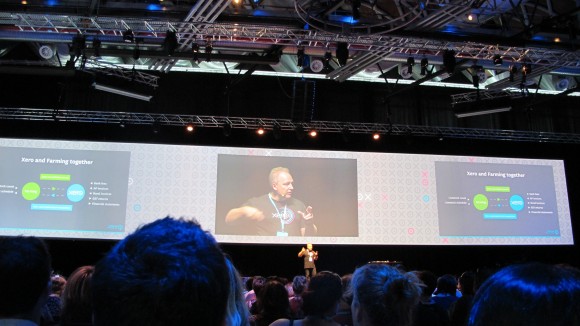